I’ve just arrived back from the ancient university town of Leuven, in Flanders, where I attended the Transit Festival: a non-stop forty-eight hours of contemporary music. Fabulous composers and a very high standard of performance and, most refreshing of all, a very un-British take on what contemporary music is. The festival has a new artistic director this year, Maarten Beirens, taking over from Mark Delaere who has built it into such a successful and well-oiled machine. 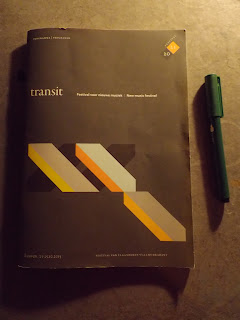 Leuven is one of the most delightful and civilised Flemish towns with its fantasic Gothic late fifteenth century Stadhuis standing opposite the sixteenth century Sint-Pieterskerk with its famous town clock – just the place to sit outside with a beer to discuss the concerts at the end of the night. 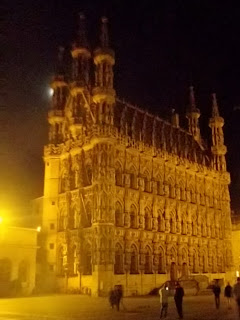 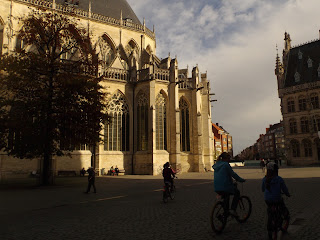 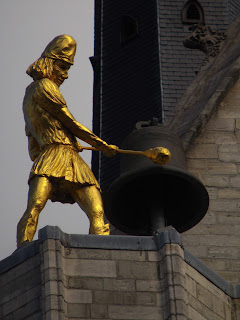 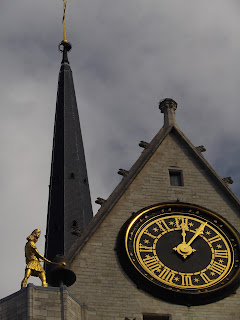 There were some fabulous events this year and great new pieces - a premiere by the Greek composer Georges Aperghis of his Wild Romance to mark his seventieth birthday (a Transit commission). Also work by an Italian composer I had not come across before, Italian-born Pierluigi Billone. Percussionist Tom De Cock’s lecture recital included a work by him for which De Cock had constructed his own instrument using a series of car springs, mounted on wooden bases and struck with hammers. 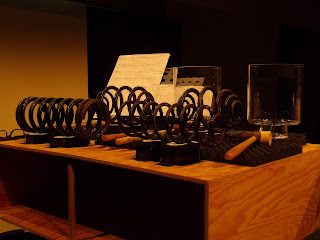 And, finally a great concert by the Flemish Nadar Ensemble in a theatre space filled with dry ice. 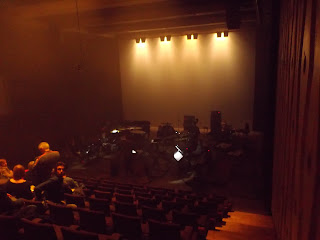 For sometime I have been curious as to what music might be emerging from Putin’s Russia and here, in twenty-nine year old Alexander Khubeev’s The Ghost of Dystopia, was some kind of answer. With conductor Thomas Moore literally chained to the podium, his gestures were an attempt to both gain musical control and break free. Khubeev’s work was as much spectacle as musical experience. The ten-piece ensemble creaked back-and-forth like a piece of rusty machinery on its last legs: an ugly but utterly compelling piece of musical grunge.

I’ve just been writing up a review of the event. Here is the link to the final published article.

Take a look at Transit's website  and photographs from this year's festival on Facebook
Posted by Peter Reynolds at 16:04 No comments:

A day out to do some research for the final part of my Creative Wales project. This is the most difficult part, requiring a conceptual leap that I’m still rather uncertain of how to make. It’s concerned with the relationship of music to architecture and place and, following on from the last part of the project (based around the abandon chapel at Cippyn), I have decided to follow up a similar site of which I have been aware for sometime. This is a ruined medieval church at Hasguard, in Pembrokeshire. 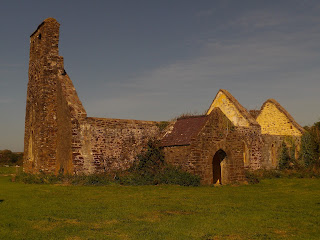 Hasguard is quite remote, about ten miles South-west from Haverfordwest and beyond the more industrialised Milford Haven part of the county. This is the bit that tourists and visitors are not so familiar with and is about four miles from the little coastal . 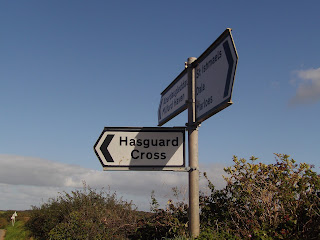 As you will see from the photos, it was a perfect early autumn day and the roads were empty apart from an endless stream of tractors; it’s harvest time after all… 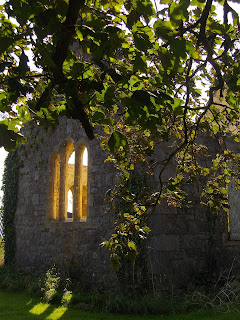 Like Cippyn, Hasguard is one of those villages that no longer seem to exist beyond a handful of dispersed houses, farms and the ruined church itself. Unlike Cippyn though, it’s not too difficult to find. 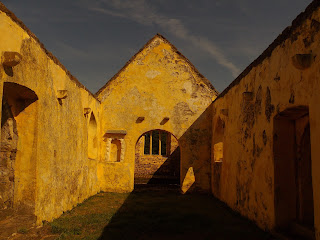 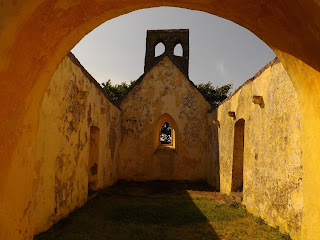 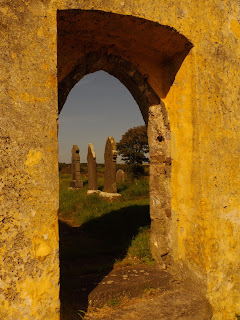 The church is medieval and of uncertain age, added to and adapted from about the thirteenth century onwards. The roof has gone and the inside rendering has been open to the elements and only two windows remain, but it’s otherwise in surprisingly good condition and there is no vandalism or graffiti. 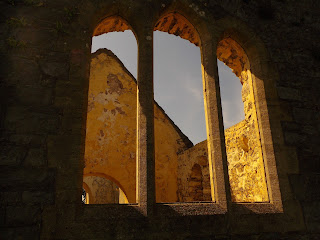 It certainly could house a performance of some kind without posing any serious Health and Safety risks. As you’ll see it seems to be well-looked after; a friend who visited it some years ago tells me that it was then overgrown with weeds and creepers, though it does still house a small colony of snails. 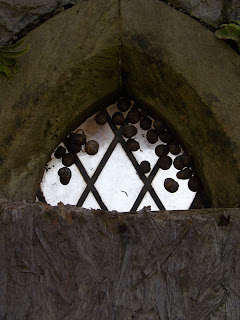 It’s difficult to know when it was abandoned. The churchyard has a number of rather ordinary nineteenth century headstones and the burials seem to have persisted through into the 1960s, so its use seems to have ceased sometime in the last forty to fifty years. 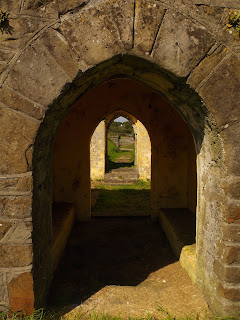 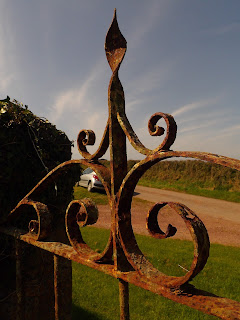 And, to follow, a visit to Dale to write up my notes together with some coffee and cake… 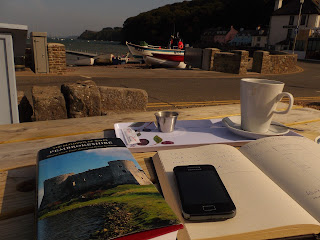 Posted by Peter Reynolds at 03:50 No comments:

A visit to the National Library of Wales

Last Wednesday the students from the Royal Welsh College of Music & Drama, Cardiff, gave a superb memorial concert for Mervyn Burtch, attended by a large and enthusiastic concert. Many thanks and congratulations to all involved. You can read more about it in this short review published by Ty Cerdd.

I've recently returned form a visit to the National Library of Wales, Aberystwyth with Michael McCartney, Chair of the Mervyn Burtch Trust, to discuss the bequest made to them to them by Mervyn Burtch before his died of his manuscript scores. 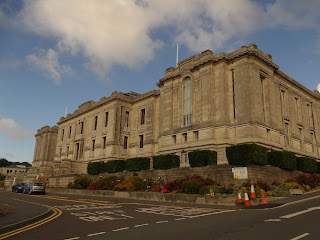 At present the Mervyn Burtch Trust is sorting out the best possible way to deposit the original manuscripts whilst retaining good quality copies (you can find out more about the Trust from one of my previous blogs). Although many of Mervyn's works were published, these probably comprised no more than 10% of his output, some of which have long since gone out of print. In addition, many of the published works are amongst his smaller scale pieces. This means that the Trust needs to keep around 600 works available for anyone who wishes to perform or study them.

We had a fascinating day seeing around the library and how it works. Mervyn's manuscripts will be held in vaults that are virtually fire and bomb-proof. 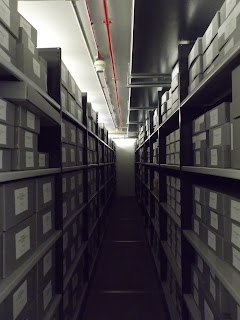 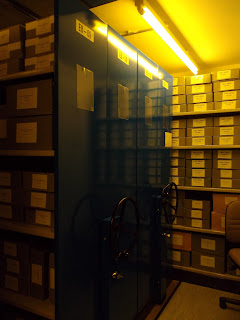 Here is Michael with myself and Dr Maredudd ApHuw, Manuscripts Librarian at the NLW. 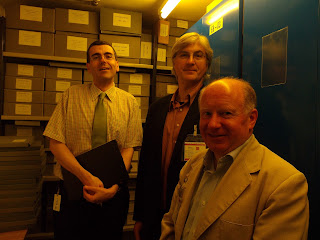 Mervyn's manuscripts will sit alongside thoes of his contemporaries Alun Hoddinott and William Mathias. 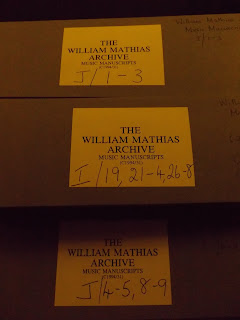 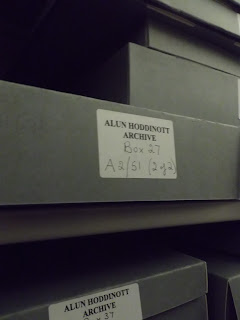 The Trust's remit is to keep all of Mervyn's works available, so it is important to have master copies of each score. For many years, the scores deposited at the NLW have been safe, but not easily accessible. Now they are pioneering a new scheme where they will make high quality scans of the scores and make these available to the Trust. Here is one of the studios where the scanning is undertaken. 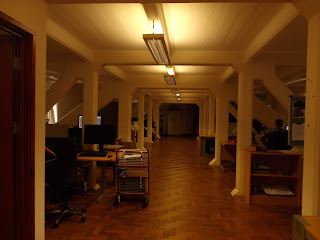 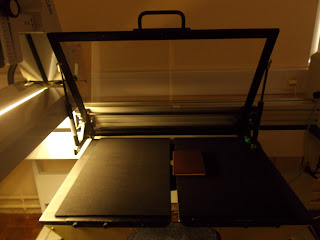 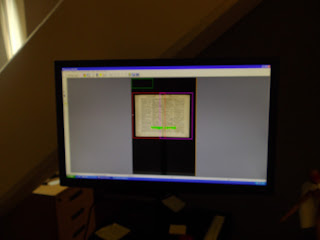 It's a very exciting and forward looking scheme in which Mervyn's bequest will play a major part.

However, there is still much work to do before the scores are packed up and delivered to Aberystwyth. Each score needs to  be checked for completeness and logged on the Trust's database, Although Mervyn left  his estate in very good order, there are anomalies as well as a number of missing manuscripts (where we only have photocopies). If anyone reading has, or knows, of the whereabouts of any of Mervyn's original manuscripts, we'd love to hear from you . Just drop a line to the Trust through the website.

Plenty of work to do now, but first, to end the day, a visit to Aberystwyth's seafront... 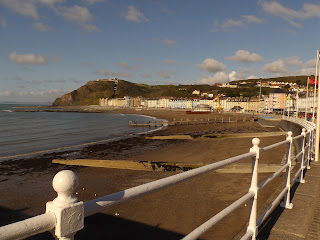 Posted by Peter Reynolds at 04:23 No comments:

Next Wednesday on 7 October at 1.15pm, the Royal Welsh College of Music & Drama will put on a memorial concert for composer Mervyn Burtch who died last May at the age of eighty-five. 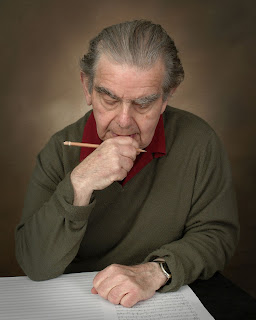 Given by various groups of college students, it gives a flavour of the huge number of different combinations of instruments for which Mervyn. He loved writing for young people and providing useful music for everyday use. When I used to programme Wales Millennium Centre's freestage (2004-07) I doubt if a week went by when something by Mervyn didn't turn up there played by the many professional, student and amateur performers who gave concerts there.

Mervyn was always intensely practical and much of the last year of his life was devoted to finding a way in which his music would remain useful after his death. To this end he encouraged and facilitated the setting up of the Mervyn Burtch Trust. The Trust now manage and make available everything by Mervyn that is not published elsewhere. Every one of his 650 or so pieces is listed there, ranging from children's operas and orchestral pieces, through choral and brass band works, to the many pieces for solo and smaller forces.

Do take a look at the website www.mervynburtch.com where you can find links to recordings of his music as well.