Adieu to all alluring toys

Next Monday night (7 December), the music department of Cardiff University are giving a very enterprising concert of music by Welsh composers. It takes place at the University Music Department at 7pm  (details here). There is music by Andrew Wilson-Dickson, Gareth Churchill, Christopher Painter, Sarah Lianne Lewis, Max Charles Davies, John Metcalf and others, including a performance of my short cantata Adieu to All Alluring Toys.

Some of the most fascinating discoveries in old churches and chapels are often hidden away amongst the memorial stones on the walls or lying benearth our feet. I particularly like those from the later seventeenth or eighteenth century with their lettering and designs by artisan stone-cutters, often with verses that have perhaps been written by someone local. I've often jotted down some of the more striking of these in my notebooks and when, in 2011, I was asked to write a song for a CD of contemporary British songs on the Meridian label, I raided by notebooks to find some texts that might be used.

Adieu to all Alluring Toys is the name of a short cantata for baritone and piano that I completed in 2011, recorded by Paul Carey Jones and Ian Ryan. it consists of two songs (or arias) framing a small central recitative.The project was masterminded by composer David Power, whose wife Linda Ingham contributed the very striking cover.

The piece takes words from three eighteenth and early nineteenth century memorial plaques found in churches in South-East Wales and Lincolnshire (those around Brecon and the Black Mountains seem to be particularly rich in such treasures). Two of the epitaphs are written to the memory of small children whilst another warns of the inevitability of our mortality. Innocent, naïve and sentimental, the words nonetheless are full of light, optimism and even humour, far removed from our more recent view of mortality. It is these qualities that the music tries to capture.

Here is the first of the texts and the one from which the piece's title comes. I found it in St Beilo, Llanfilo in Breconshire. It's in memory of  the Daughter of Walter Vaughan, of Tredomen, . She died the 31st March 1774 Aged 10 years. 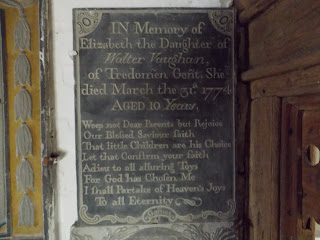 There is a brief central recitative which I took from , Breconshire. Inscription: James Probert who departed this transitory life, September 17th 1756, aged 66. Here is the church, hidden in the hills. 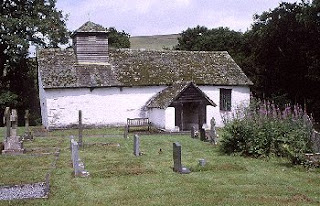 I found the final text in Grimsby Minster, Lincolnshire: Inscription: Under this Stone was Buried the Body of GEORGE, Infant son of Captain PETER RYE, Royal Navy, who died Dec’r 6th 1808. 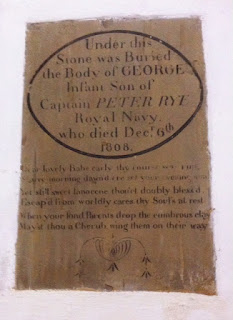 Because this is a commercial CD, the music hasn't been posted up on a website, but you can hear extracts if you go to Meridian's site, buy it online or, better still, come along next Monday.

Posted by Peter Reynolds at 13:30 No comments: