Latvia's leading composer Pēteris Vasks has been in Cardiff for the last week for a large 70th birthday retrospective of his work at the Vale of Glamorgan Festival. Last night's concert at All Saints' Church in Penarth was devoted to a searing performance of his Piano Quartet by Ensemble MidVest (from Denmark) and also marked John Metcalf's (the festival's artistic director)  forthcoming 70th birthday with incandescent performances of three of his works (the finest performances of them I've heard). Here they both are cutting a birthday cake after the performance. 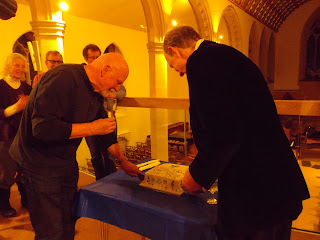 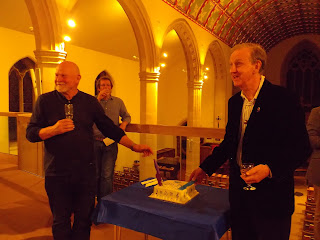 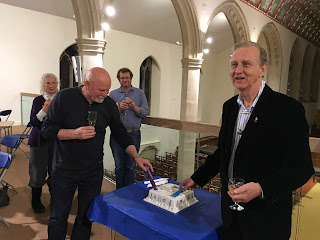 I remember first hearing his music back in 1996 when the whole festival was devoted to music from the Baltic States (the first major exposure to this then unknown music in Britain). It was already a hugely rich selection of fantastic new pieces, but the one piece that absolutely blew me away was Vasks’s Symphony for Strings, Stimmen. Twenty years later there's a richer legacy of work. On the first night of the festival (10 May) I was lucky to be able to interview him (with our wonderful interpreter Andy Taurins) and hear about the constraints under which he worked as a composer until well into his forties under the Soviet Regime. 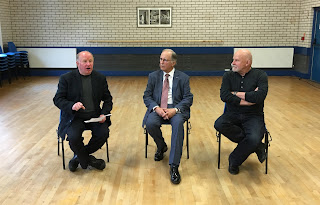 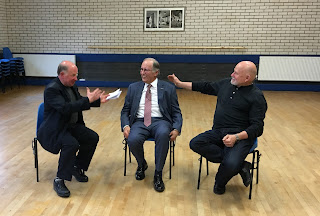 Before the Second World War, Latvia, rather like Wales, had only a limited tradition of composition. From the 1940s until Perestroika, their composers had limited access to developments in the west and laboured under Soviet political pressure. They had to invent for themselves a recognizable national musical voice and probably, beyond developments in Poland, had little access to the west. Yesterday morning Vasks gave a fascinating interview for the composition students at Cardiff University where he talked about only being able to access new music occasionally via Radio Vienna. What comes through his music and from the man himself is a huge generosity of spirit. For students more used to listening to lectures about row rotations, hearing a composer declare that the most important thing in his music was love was probably quite a new experience. 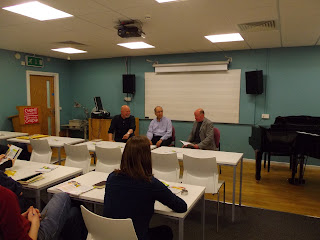 John Kehoe's description of his music written now about twenty years ago still sums up his approach: "Vasks will frequently abandon technical explanations in favour of nature imagery, the grandeur of a mighty forest, the free flight of birds and their song. These are matters very close to his heart, and of these things, or rather of their spirit, his music speaks."

Vasks's new Viola Concerto was premiered at BBC Hoddinott Hall tomorrow night by the BBC National Orchestra of Wales (20 May at 7.30pm);I interviewed him and the soloist, Maxim Rysanov..

You can see more details of this year's Vale of Glamorgan Festival here.
Posted by Peter Reynolds at 01:25 No comments: 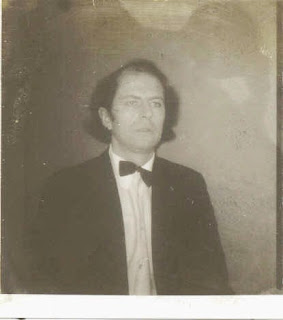 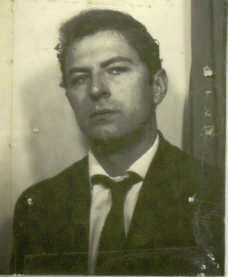 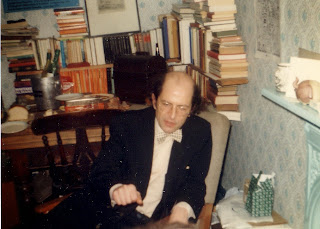 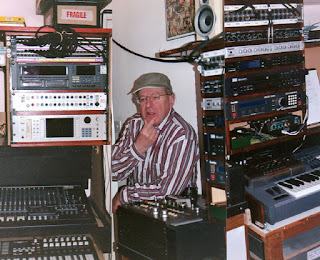 Posted by Peter Reynolds at 15:45 No comments: 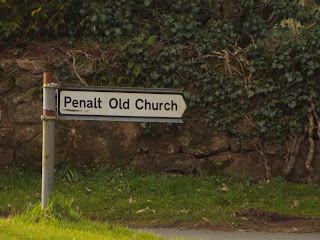 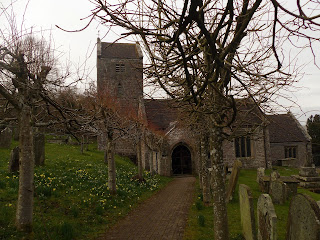 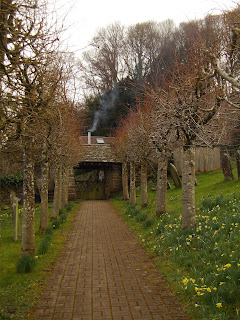 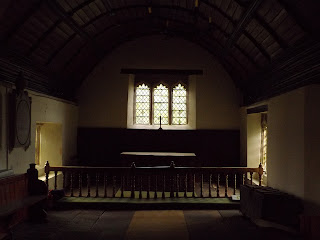 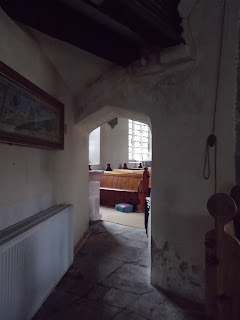 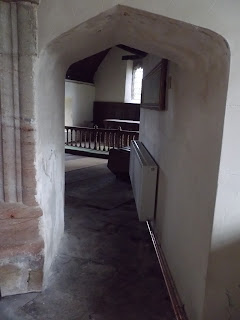 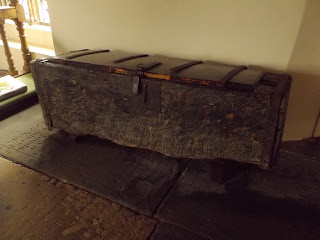 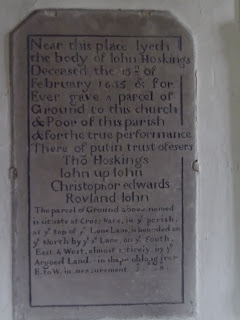 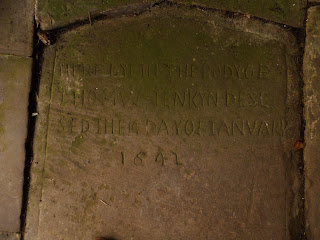 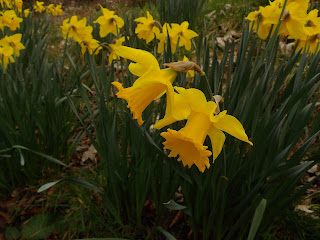 Posted by Peter Reynolds at 08:43 No comments:

It's been a weekend of contemporary music at St David's Hall, Cardiff. On Saturday lunchtime, the last of this season's series of lunchtime contemporary concerts was given by Cardiff's own Arcomis Ensemble, featuring the fabulous violinist Rhys Watkins. Preparations for the next season's series is now in full swing.

On Sunday afternoon, St David's Hall and the Welsh National Opera Orchestra launched their ambitious THREE concert - three premieres of newly commissioned works by living composers presented in one concert. The project was already well-advanced when I joined the Hall as its Classical Music Adviser at the end of 2014, but it has been fascinating to see how it evolved. 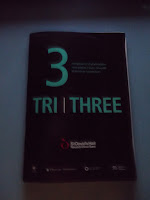 The performances represent three very different kinds of new music. The opening piece, Mametz Wood, was by Gareth Glyn, though, in his words, he didn't compose a note of it. The work was a collaboration between him and pupils from Michaelson Community College, Corpus Christi High School and Radyr Comprehensive. Under the guidance of composers Helen Woods and James Williams, the pupils created a range of 'raw' musical ideas that were then woven by Gareth into a deft and and very effective orchestral work. The inspiration for the ideas came from a painting by Christopher Wood (1873-1934) in the National Gallery of Wales, The Welsh at Mametz Wood, based on the First World War incident during the battle of the Somme. 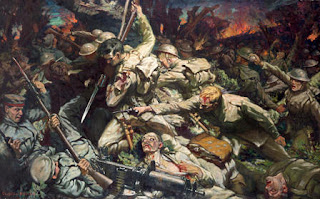 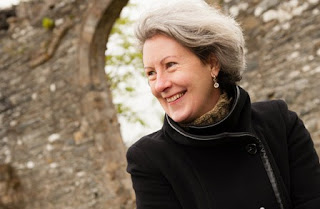 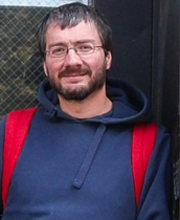 This then moved on to a commission from Welsh composer Pwyll ap Siôn: a series of four songs, Chaotic Angels, for soprano and orchestra setting poems by Gwyneth Lewis, one of Wales’s most respected poets.  I've followed Pwyll's music since first hearing it at an SPNM concert at Bangor University where we were both having works performed back in 1991, but these songs were the most impressive work I have heard from his pen: a wonderful clarity and response to the powerful words, sung here by young Welsh soprano Céline Forrest (photo below from yesterday's performance). 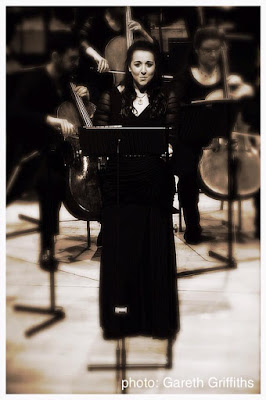 The commission came around because, back in 1997, as a very young composer, Pwyll had been commissioned to write a song cycle for the Welsh Proms which, for various reasons, had not been performed at the time. We initially had the idea of giving the piece a belated performance, but Pwyll, like most composers, was more interested in composing a new work.

Finally, for the third work, St David’s Hall was one of four international co-commissioners for the Babylon-Suite by one of the most critically acclaimed German composers of his generation, Jörg Widmann. 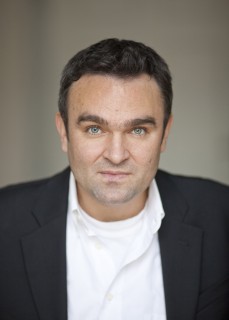 The suite is drawn from one of the most ambitious and lavish operatic premieres of the last few years (you can see an extract here). a real tour de force in its virtuosic use of the modern symphony orchestra with around 100 performers on the stage (St David's Hall had to bring out its rarely used second stage extension). If you're not already familar with Widmann's music, then Tom Service's profile here is a good introduction. The Welsh National Opera Orchestra were on top form, conducted by Lothar Koenigs, giving his final performance as Music Director of WNO (and Simon Phillippo - below - in Gareth Glyn's piece). 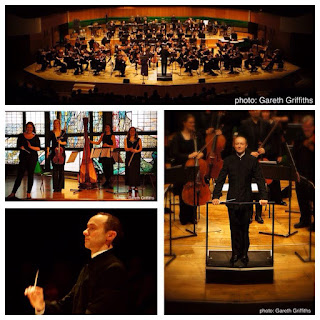 You can read Philip May's review for Bachtrack here.

Posted by Peter Reynolds at 15:13 No comments: