Readers of this blog might remember between October last year and last March I reported on a the process of planning a video with a musical soundtrack. During the summer the final edits were finished and I have just uploaded the result to You Tube. Click here to see it. 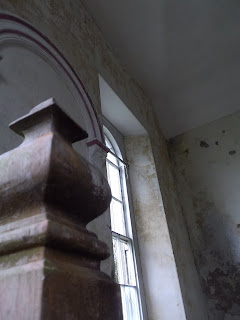 The video features and is built around the small non-conformist chapel of Bryn Salem Chapel in Cyppin, Pembrokeshire, founded around 1847 and built in 1852. It now lies unused and derelict, about half a mile off the main road on the edge of a field. You won't find an entry for it in the Buildings of Wales architectural guides. 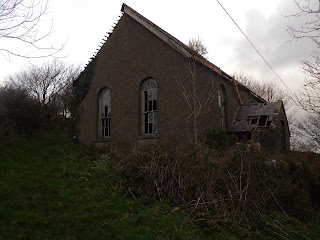 The project was part of a the Creative Wales project from the Arts Council of Wales which I am currently completing. It is concerned with musical performances of my music in unusual and remote spaces; particularly small Welsh churches and chapels. Whilst the idea of a performance at the chapel was attractive, in this instance I wished to creating a short video around the chapel, for solo double bass and an electronically generated soundscape made of manipulated natural sounds (wind, birdsong and so forth) captured at the church.

The video is concerned with the idea of the decay of the chapel and, perhaps, other elements, places, ways of life and so forth in the area and community. But this is not necessarily seen in a negative context: nature gradually and gently reclaims the chapel and its structure,re-absorbing it back into the landscape. A similar process is also applied to the musical structure. 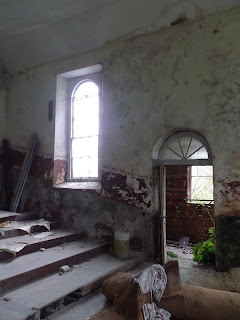 This short film of the chapel and its location was made by Aaron J Cooper and directed by Heledd Wyn Hardy (seen below working on the film on a very cold January day earlier this year). 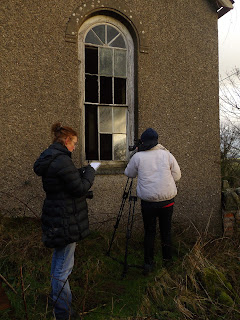 The music is played here by Ashley John Long and the recording engineer was Odilon Marcenaro.The last sentence however doesn't begin to reveal how much Odilon helped me through the process last winter, mentoring me through the use of electronics and then showing me the process of transferring these to film. Without him it would not have happened.

This is very much a first stab at this way of working and therefore a student effort - it's presented here as a curiosity and more as work in progress than a finished item. I am very much aware of its defects and crudities (at a musical level) but was fortunate to work with several fabulous people - particularly Aaron and Heledd (who constantly pushed me forward and encouraged the project) not to mention the wonder double bass playing of Ashley John Long.